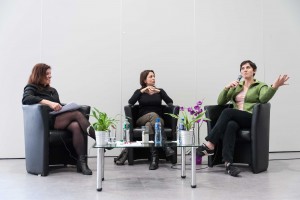 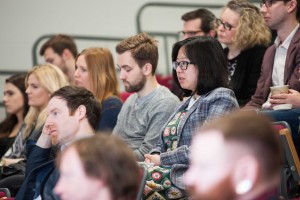 Sharing a stage and a public conversation with the megahit Making a Murderer creators Laura Ricciardi and Moira Demos is akin to having a singsong with Glen Hansard. And the fact that this Irish Innocence Project at Griffith College event happened after a Hail Mary email to the pair on the eve of their arrival in Dublin for a two-day visit and materialized in a Q&A before 100 people 36 hours later is equivalent to a Christmas miracle. But it shows how truly gracious and grounded these two people are.

All that happened and the Griffith College students and staff who got to hear what these two extraordinary filmmakers had to say about the story of Steven Avery and Brendan Dassey and their 10-year journey chronicling it are all the richer for it.

Making a Murderer creators Laura Ricciardi and Moira Demos consider themselves filmmakers, not journalists, but they certainly do the work of the best journalists I know.

They are steered by the best intentions.

As a journalist who has been working in the field of wrongful convictions for a decade and as the project manager of the Irish Innocence Project at Griffith College – which is one of two out of 68 innocence organizations worldwide recognized by the Innocence Network that has both law and journalism students investigating cases – I am always hoping to promote the role of both law and the media in holding the criminal justice system accountable for its mistakes – or worse, misconduct.

In the case of Steven Avery, he had two exceptionally capable lawyers and yet many believe the justice system failed him. Steven Avery would be one more anonymous person sitting in a jail cell claiming his innocence were it not for the fact that Laura Ricciardi and Moira Demos were willing to spend a decade of their lives documenting his case.

And yes, if this blog sounds fawning, it does amount to an honest love letter to Laura and Moira.

Their example of integrity, determination and doggedness would be inspiration enough, but these two women have gone beyond the best of what could be expected in such an endeavor. They consistently have shown the deepest respect and compassion for the subjects of this game-changing series.

And, that compassion is a trait you can’t teach in film school or journalism school or law school. That emanates from a heart that is wide and full. And we all should be inspired.