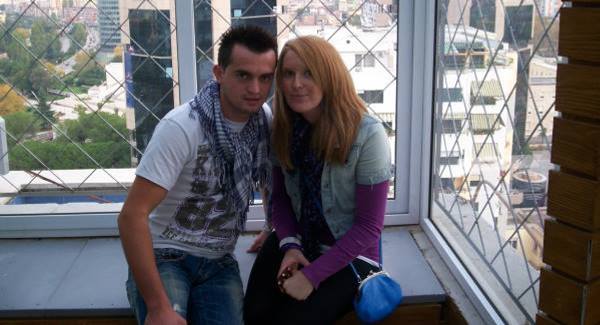 Mark Marku and his younger brother Andreas were found guilty and sentenced to 18 years imprisonment in Crete along with three other men, for a series of armed jewellery shop robberies and car thefts during 2010.

Mark is married to an Irish citizen, has full Irish residency rights and was living in Ireland when most of these crimes took place.

No credible evidence was ever produced to convict either of the men of any of the robberies. The only evidence brought against Mark and Andreas by the prosecution were witness identifications by the victims for some of the robberies, despite the fact that all the thieves wore balaclavas.

Ireland AM Interview with Julie Marku

CCTV footage clearly shows that identification is impossible. They stated even with the best scientific equipment, with these CCTV images it was impossible to rule anybody in or out. Despite selective recording of events, court transcripts confirm these witnesses stating that they did not see faces and are making identifications based on body shape and size. Mark and Andreas are both medium build and medium height, like thousands of other young men in Crete.

A positive DNA report, claiming Mark’s DNA was found on a pair of rubber gloves, was leaked a week before trial. The Prosecution claims these rubber gloves were found in a stolen car allegedly used in a robbery on the 5th June 2010. Mark was not in Crete on 5th June 2010, he was in fact in Ireland. Mark’s defense team raised this and several other concerns about this report, including the fact that the DNA report was dated after the Book of Evidence had closed, there is no chain of evidence for these gloves, and the DNA report shows that there was a mixture of DNA that could have been from one in more than a 100,000 people in Europe, and the glove is missing.

Numerous Irish State and legal documentation, affidavits and employment records, flight tickets, passport stamps (including Greek) that placed Mark in Ireland when many of these crimes took place. On the last day of trial, the prosecutor claimed all this evidence was falsified, without having any evidence or having raised any concerns during the three months since the evidence had been lodged with the courts.

Concerning a robbery that took place on a date in July when Mark was in Crete, he presented an alibi from a well-respected local Greek businessman, whom Mark was having dinner with at the time.

The man remembers it well, because the police came into his restaurant on their way back from attending the scene of the robbery to get some food (police station around the corner from restaurant) and told them what had happened. The accuracy of this witness’s statement was called into question by the prosecutor, yet the claims of witness’s being able to identify raiders wearing balaclavas was not.

The Irish Innocence Project, based in Griffith College, has been assisting Mark’s defense team in evidence gathering for two years, gathering expert DNA testimony from renowned DNA expert Dr. Greg Hampikian and that of an eyewitness identification expert. The project continues to work with Mark’s Greek lawyer as the case is before the Greek Supreme Court.