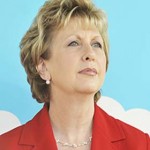 Mary McAleese was President of Ireland from 1997 until 2011. She was the first President to come from Northern Ireland. Born in Belfast in 1951, the eldest of nine children she grew up in Ardoyne, a sectarian flashpoint area of the city and experienced first-hand the violence of The Troubles.

The theme of her presidency was Building Bridges and her work for peace and reconciliation culminated in the historic state visit to Ireland by H.M. Queen Elizabeth II in May 2011. A barrister and journalist by training she was Reid Professor of Criminal Law, Criminology and Penology at Trinity College Dublin, Director of the Institute of Professional Legal Studies and first female pro-Vice Chancellor at the Queen’s University of Belfast. She also worked as a journalist in Irish radio and television.

For many years prior to her election as President of Ireland she was involved in social justice campaigning. She was a co-founder of Belfast Women’s Aid, the Campaign for Homosexual Law Reform, the Irish Commission for Prisoners Overseas and Co Chair of the Working Party on Sectarianism set up by the Irish Council of Churches and the Catholic Church.

She is the author of “Reconciled being: Love in chaos”(1997), Building Bridges (2011), Collegiality in the Code of Canon Law (2014). She has a Masters degree and Licentiate in Canon Law and is currently pursuing a doctorate in Canon Law at the Pontifical Gregorian University in Rome. Her area of research is children’s rights in Canon Law.

Since leaving office she has been a Burns Scholar at Boston College (2013) and Distinguished Carmel and Martin Naughton Fellow at the University of Notre Dame (2015). In 2016 she will be the Distinguished Visiting fellow at St. Mary’s University, London. She is Chair of the Von Hugel Institute at St Edmund’s College Cambridge University and Patron of the Bob Hawke Institute,University of South Australia.

Mary is married to Martin since 1976. They have three adult children and one grandson. Martin gave up his career as a dentist during Mary’s presidency so that he could work full-time on the bridge building work with the Northern Irish Unionist and loyalist community. He is currently Chancellor of Dublin City University.