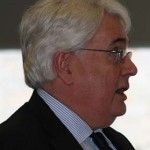 Hon. Mr. Justice Frank Clarke was educated at Drimnagh Castle CBS and University College Dublin where he was awarded a B.A. in Mathematics and Economics. After completing his legal studies at King’s Inns he was called to the Bar in 1973 and practiced until his appointment to the High Court in 2004, then becoming senior counsel in 1985. During his time at the Bar he practiced mainly in the commercial and public law fields. Mr. Justice Clarke served for many years on the Bar Council including a term of two years (1993-1995) as its Chair. He also served as Chair of the Council of King’s Inns from 1999 until 2004. He was a member of the Council of the International Bar Association from 1997 to 2004, serving as co-Chair of the Forum for Barristers and Advocates (the international representative body for the independent referral bars) from 1998 to 2002. In the academic field Mr. Justice Clarke was a professor at King’s Inns from 1978 to 1985 and has been Judge in Residence at Griffith College Dublin from 2010 to date. Mr. Justice Clarke was appointed Adjunct Professor in the Law School in Trinity College, Dublin in September 2012. He has served on the board of the Irish Law Reports Monthly and is the nominee to represent the Chief Justice on the Incorporated Council of Law Reporting for Ireland. Mr. Justice Clarke was appointed to the Supreme Court in March 2012.